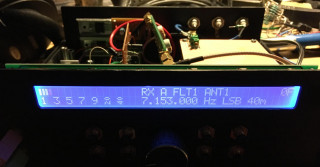 I know these updates are far apart but the project is slowly progressing. This update is about two of the main boards of the transceiver. I decided to make this transceiver a modular design where functions are separated into modules that can be tested and verified separately. This makes it possible for me to experiment with different designs and improve the construction piece by piece. Lets bring back the original block diagram of the transceiver.

The shadowed areas are the ones I'm describing here. Mixer and amplifier board on the left and product detector and modulator board on the right.

Mixer and amplifier board

This board contains the double balanced mixer and four identical amplifier stages. Two stages for RX and two stages for TX so that for both RX and TX there are one amplifier of each side of the mixer. Which of the stages than are activated is controlled by their respective supply voltage. One supply for RX and one supply for TX. Also between every stage there is a diode switch, also controlled by the supply voltage. 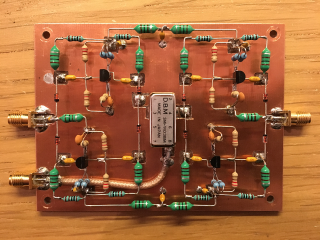 The board layout is more or less the same as the schematic so it should be relatively easy to follow. Input and output signals are connected using PCB edge SMA connectors. Top left connector is RF in/out, right is the IF in/out and bottom left is the mixer frequency input directly from the Adafruit Si5351 board. 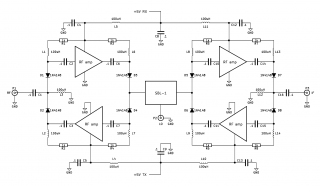 For simplicity I have left out the amplifier schematics in the schematic above. Contents of every amplifier block is seen below. It's the same as the amplifier that I designed in part one of this transceiver project. 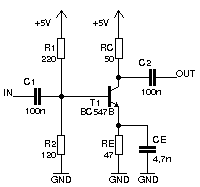 This amplifier could be substituted to some other 50 ohm amplifier such as an MMIC.

Product detector and modulator board

This board contains two more of the previous amplifier stages. One in each direction in the left side of the board. They too are switched in and out depending on the RX/TX supply voltage. The product detector in the top right quadrant of the board is unchanged from my initial design. It's working very good and has a very high dynamic range. 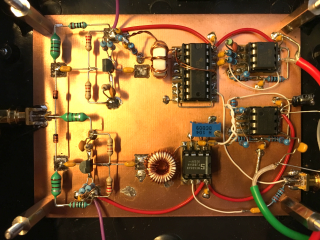 Left SMA connector is the IF in/out and the bottom right SMA connector is the BFO input from the Adafruit Si5351 board. The latest addition to the transceiver is on this board. It's the DSB modulator in the lower right quadrant of the board. (Now my transceiver can finally transmit!) The DSB signal is passed through the crystal filter (between this board and the mixer board) to filter out either the upper or lover sideband depending on the placement of the BFO frequency in regards to the filter pass band. 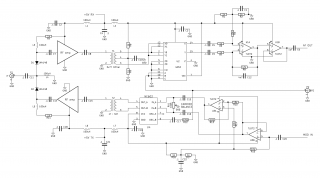 I decided to use an NE602 for the DSB modulator. It's a very common IC for this purpose. The MC1496 may be better performing but I wanted to give the NE602 a try. I mentioned earlier that I did not want to use the NE602 in the product detector because of it's limited dynamic range. That limitation still apply here but in this case it's okay, I want the SSB transmission to be processed with controlled dynamics anyway to give high output a readability on the receiving end. My use of the NE602 is however a bit different from most designs I've seen. The output side is simple. It's just a matching transformer to match the NE602 output with the 50 ohm input of the amplifier. The input is a bit unusual and requires some explanation. I've been disappointed with the NE602 as a DSB modulator in the past because of it's relatively bad carrier suppression. This design tries to mitigate this a bit. One big reason for carrier leakage is bad biasing within the NE602. When used as an RF mixing stage this is not very critical but when used as a DSB modulator this is a big problem. My idea to mitigate this is to add external biasing adjustment and feed the NE602 with balanced audio to keep everything as symmetric as possible. It is also VERY important not to drive the OSC input to hard (I use a 470k series resistor in this design). VR1 sets the bias balance by adjusting the DC levels of IN_A and IN_B of the NE602. DC levels should be equal on both inputs for minimum carrier output. Starting off by centering VR1 and then slowly adjusting to find the spot where the carrier is as low as possible. A multi-turn potentiometer really helps here. Two TL072 op-amps creates the balanced signal for the NE602. The modulation input can take a condenser microphone directly (just need a bias resistor) for a complete modulator. I need to add some kind of speech processor also but that's a future update. 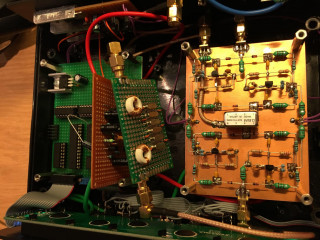 The inside is a bit bit messy right now but it works! Controller board has been re-designed and the headphone amplifier is just temporary. I will add another analog board to contain the audio processing and filtration along with a proper headphone/speaker amplifier. Next up is filtering. I need some suitable band pass filtering and RF power amplifier. Right now using just the IF amplifiers the output power peaks at around 1mW. Not much but enough to be picked up on a nearby receiver.

One thing I also added was a regulated power supply with RX TX switching. I decided to use linear regulators since they are generally quieter and doesn't generate spurs. They are ineffective and will require cooling but to me it's an okay trade-off.
by daniel | comments [4]
radio trx
by Ben 2020-04-29 05:36 UTC
In the dsb modulator schematic, pin 4 of the two tl072 are connected to each other, but nothing else? Should they go to ground? Thanks!