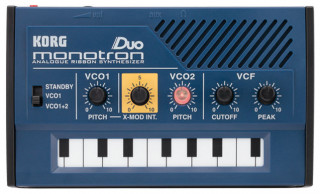 They have been out for a while now. First was the original Monotron with a single VCO (sawtooth) plus filter and now there are two more. The Monotron Duo and the Monotron Delay. The Duo consists on two square wave VCO's where one of the VCO's can modulate the other and it can create a very computer game-ish sound that i like. It also feature the same filter as the original Monotron (a copy of the old and trusty MS10/MS20) and a CROMATIC ribbon keyboard. The chromatic function is actually making it quite playable and it is easy to actually tap out simple melodies. The Delay consists of a single sawtooth VCO, a ribbon keyboard which cover the entire range of the VCO (of course non-chromatic), the same filter as the others (except it has no resonance control) and a built in digital delay. The delay circuit is based on a PT2399 chip also found in cheap Karaoke DVD-players and actually sounds quite nice given the cost and complexity. I decided to go for the Monotron Duo and picked one up from MeMe Antenna in Brooklyn for $55. This was actually in March so I have had it a while now. It is clearly more musically oriented than the Delay which is more of an effect box. The Duo has a push-button on the back to change between three different scales on the keyboard plus a non-chromatic mode making it work like the original Monotron. Under the hood of the Duo there is actually a microcontroller taking care of the chromatic function of the keyboard. The microcontroller is an MSP430 from TI. Perhaps it is possible to replace the firmware to enable MIDI input? There are a few pads on the PCB left over and connected to the uC that might be used for input. The schematics are available from the Korg Monotron website. What if Korg already implemented MIDI just like they did on the Monotribe? MIDI input only requires one single pin. That would be fun!
by daniel | comments [0]
monotron synth music