A better serial port for the MC3
2014-04-01 20:16 UTC
When needing to save data directly from my PC to the CF card of the MC3 it became apparent to me that the MC3 really needed a proper serial port with hardware handshaking. The stream of data from the PC needed to pause while the CF card was written. This can be achieved by two extra signals in the RS-232 port. RTS (Request To Send) and CTS (Clear To Send). There are many ACIA/UART chips to choose from. The classic ACIA among the Motorola chips is the MC6850. It's old and simple. A bit too simple by todays standards perhaps but still useful. Hitachi made a CMOS version of the MC6850 called HD6350. It runs a lot cooler than the MC6850 but is fuctionally identical. I had a pair of HD6350 so I decided to base the design around this chip. 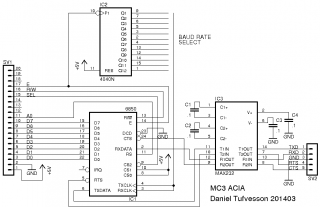 The 6850 does not contain a built in baud rate generator but there are three built in dividers to choose from. 1:1, 1:16 and 1:64. The MC3 has a baud rate friendly E clock of 1.2288 Mhz. With the correct divider some useful baud rates can be generated from this frequency without the need of an extra separate oscillator. Feeding the E clock directly to the 6850 would yield baud rates of 1228k8, 76k8 and 19k2 baud. Not really useful since 19k2 baud is the only standard baud rate and also quite slow. But by dividing the E clock by two to provide 614.4kHz for the 6850 would give 614k4, 38k4 and 9k6 baud respectively. That's getting quite good. 38k4 and 9k6 are standard rates. 614k4 is not really considered standard but those interfaces that can handle it will provide some serious speed. I used a 4040 as a divider to make the board flexible. Also the extra outputs of the 4040 will make it possible to select many more baud rates by jumpers if needed. A standard MAX232 level shifter provides the correct RS-232 levels for RXD, TXD, RTS and CTS signals. 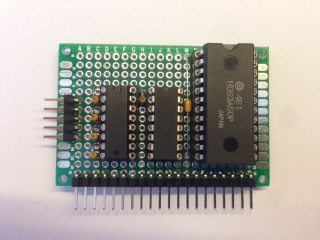 Some room to spare for eventual jumpers. Also note that a HD6350 is used instead of the MC6850. 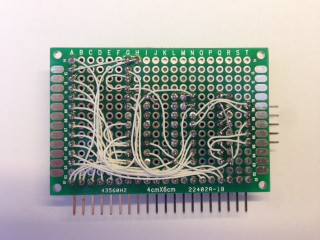 This board turned out okay. The DCD signal is not connected but is really only useful when connecting a modem. It's doing what it should which is to provide the MC3 with a stable serial interface at 614k4, 38k4 and 9k6 baud. Sample programs Terminal program - source Console driver - source
by daniel | comments [0]
MC3 8bit