The YM2413 FM OPLL
2017-03-27 06:22 UTC
An update. Finally! This time I've been playing around with FM sound for the MC3. FM sound generation is a bit more complex than my previous sound generation attempt with the YMZ284 (one of the smallest AY-3-8910 / YM2149 clone there is). Ideally I wanted to build a small board that would fit on my MC3 I/O bus. Most FM chips come too big packages for this but after some digging I realized that the YM2413 would be perfect for this. It is a low-cost version of Yamaha's other OPL chips and is often referred to as the OPLL. It comes in a small DIP-18 package! Originally I think it was intended for video and arcade games and it was also used in a few game carts for added sound capabilities. To name a few it was used in the MSX2+, MSX turboR and the Japanese version of the Sega Master System.

This is the bock diagram of the YM2413. It has a simple 8 bit bus interface with one address line. A quite common interface for this kind of device. This way the chip has two registers. One for selecting among the 271 internal register bits of audio generating goodies and one for writing data to them. There is no way to read back anything usual from the YM2413 so I consider it as a write only device. On the analog side there are two outputs. One for melody and one for percussion. I suspect the reason for this is to keep them on separate audio paths for filtering and mixing but really all designs I have seen treats them equally and mixes them together. Below is the board I ended up with. It could have been made using fewer chips but as with the YMZ284 board I wanted to isolate the YM2413 from the bus as much as possible. 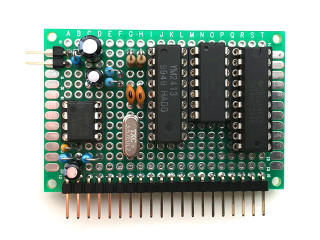 Have a look at the schematics below. U1 and U2 could have been excluded for simplicity but they do wonders for suppressing audible noise from the bus. They also protects the YM2413 from the outside world. 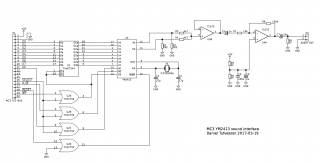 On the analog side of the YM2413 I have mixed together the MO (melody output) and RO (rhythm output) signals as suggested in the application manual. They are then fed into a high impedance voltage following TL072 op-amp to maintain as much of the signal integrity as possible. Some designs suggest adding a capacitor to make up a passive low-pass filter to get rid of high frequency sampling products but I did not want to put additional strain on the outputs. This kind of filtering can be done at a later stage if needed. Following the high impedance buffering stage I had to add an amplification stage since the signal levels coming from the YM2413 is actually pretty low. This stage is made up using the second part of the TL072 working as an AC-coupled inverting amplifier centered around Vcc/2. I had to make the amplification a factor of 10 to achieve decent line levels on the output. I was a little surprised about this but looking at other designs this seems to be normal. The output of the YM2413 is a lot lower than the YMZ284. Because of all this amplification the YM2413 is noisier than the YMZ284. But then again, It's a totally different chip. One could reason that given the many channels in the YM2413, more headroom is needed and therefore a lower total output per channel. I mentioned earlier that this was a cost reduced version of the Yamaha OPL. One main reason is that it has 16 selectable instruments out of which only one is customizable. The other 15 are stored in the built-in ROM. This of course reduces the flexibility of the chip but it also makes it easier to get started.

The table of instruments can be seen above. Instrument 0 is the user customizable instrument. The others are preset by Yamaha and it's not really a bad thing. They are well made and well known from other Yamaha keyboards and General MIDI. Since FM generation is not very good for creating percussion sounds there is a separate percussion module in the YM2413. It consists of the basic kit of base drum, snare drum, tom-tom, top cymbal and high hat. 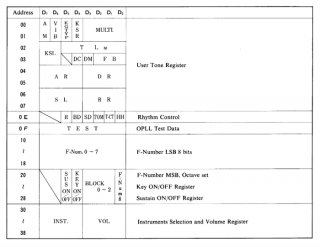 How does it sound?

To get some feeling for the YM2413 and to verify that my design was working I created a music player for VGM files. VGM is an attempt to make a general file format for video game music. It is common for archiving Sega and MSX music among others. Quite a bit of YM2413 tunes exists in this format. Perfect for this project! VGM files in their standard form is a bit heavy for my MC3 to handle so I created an intermediate file format and associated converter and playback programs. The intermediate format is simply a dump of all registers sampled at 50Hz. More manageable for the MC3 than VGM. This is the work flow: [VGM file] ---> [converter program on a Linux PC] ---> [intermediate format] ---> [player program on MC3] ---> [YM2413] The conversion program for the PC is written in C and the player on the MC3 is of course written in assembly. I will put everything online as soon as I have cleaned up the code a bit but for now I will leave you with raw recordings generated by this interface. This is from the game Xak for the MSX2+. Composed by Ryuji Sasai and Tadahiro Nitta. Possibly some of the most well written YM2413 music out there. All files recorded from and generated by the interfaced described above. Town of fearless Battle field Verdant land Evil tree Path to the fort Water dragon Town of Nomana Fire elemental & Water elemental Combined elemental Toen of Nemnu Land of flames and sky Maker message
by daniel | comments [2]
MC3 8bit OPLL YM2413
by Laurens Holst 2017-08-28 18:12 UTC
Sounds great! Next, add an YM2149? :D